Home / Blog / Mental Health / Sanity and the City: Welcome to the jungle!

Sanity and the City: Welcome to the jungle! 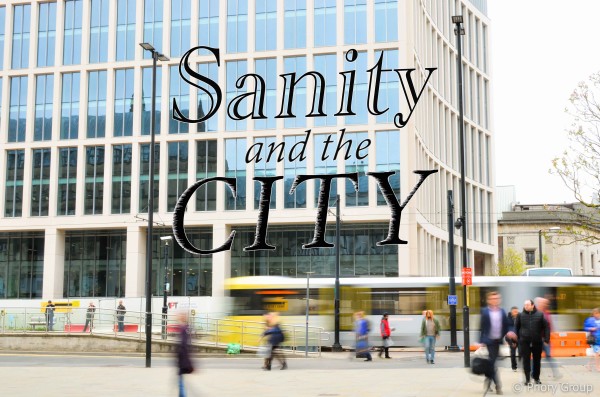 In the run up to Mental Health Awareness Week, 16-20th May 2016, Business Healthy is publishing the Priory’s ‘Sanity and the City’ series week by week.

Part 1: Welcome to the Jungle

Do you work in a high pressured role?

Would you honestly feel comfortable discussing your mental health at work?

I work in the City. Whenever I describe what I do to friends and family they just look blank. They have stopped asking about it because it means nothing to them. To be fair, it doesn’t mean much to me either.

So I’m not going to go into detail here, because there’s no point. All you need to know is that I work with investment banks, hedge funds, private equity companies and a lot of super-geeky stuff in between. It’s a world of barbarians, vultures, vulgarians and psychopaths. But it’s also a world of loving, caring, vulnerable people with open hearts. They just don’t choose to show it to one another, unless they really, really, really, have to.

I agreed to write this because I have a sneaking suspicion that everyone with mental health problems in the City or in any high pressured environment think that they are alone. And they’re not. They’re really not.

We are some way away from that right now. But every journey…

I would love to tell you my real name. But I’m still in recovery. And I’m scared. I hope one day not to be. And this is one way of helping me get over that fear.

Something good can come of this.

Dropping the mask is a risk in any workplace and I think it’s fair to say it’s an even greater risk in the City. There is very little tolerance for anything perceived as weakness – illness of any kind. People will say they care and that you should look after yourself. But that’s just it. Look after yourself, because we would rather not know and we have a lot of work today thanks, and now we have even more because you have decided you’re not up to it.

The thing is I don’t really believe that this is who they really are. If you get many of these people one-on-one and they will reveal the depths of their humanity. Not all of them, but many of them. They are just as driven for good causes in their personal lives as they are for their employer when they are at work. But the relentless treadmill of life in the City doesn’t let them stop, take a deep breath, look around and think – does this look sane?

There are many cultural theorists who would say it is absolutely not sane. It is pathological. It can only lead to death and destruction. It is the primary cause of alienation in the modern world and it has made drink and drugs into potentially lethal but necessary crutches in a post-industrialist society. It’s a war between humanity and capital.

But that’s a phoney war. It’s not that simple. It never is with human beings.  But I definitely became a casualty.

The start of the spiral

I had started a new job and had people to impress (never a good idea). I moved as fast as I could, planning, creating, removing, building, dismantling and not taking any time to stand back and see what it looked like.

I stopped sleeping properly and woke in the night with visions of the tasks ahead, or more usually, the obstacles. I would go to bed late and wake early. I almost never left the office. Not even my floor. The culture was one of heads down, no talking, no stopping and no jokes please. Funnily enough clowning is crucial to staying sane.

Like the proverbial rolling stone, I was gathering a lot of mental moss. I started feeling tingling in my arms in meetings. I felt like I was wading through sinking sand as I walked the corridors. My body was screaming ‘Get me out of here!’ but my mind was having none of it.

When my mind finally cottoned on to this need to flee, it began to concoct outlandish plans for escape (I find it more helpful now to observe my mind rather than to identify with its meanderings).

I began looking at vineyards, glamping sites, exotic livestock and more. I had spreadsheets, feasibility studies and an elated sense of liberty at hand! Let me know if you know anyone who wants to buy a llama.

This, my friends, is hypomania. It’s mania’s less dangerous cousin, driving you and your thoughts forward but slamming the brakes on when it hits the wall that separates you from psychosis, delusions, messianic visions and grandiosity. It can be very creative and empowering and in the workplace it looks like very high functioning. It actually feels quite good at first too.

But like anything forced to a peak, it must inevitably crash. A psychic wave flooding your life, wrecking everything in its path. If you’re lucky, you get to stand high and dry, look back and say ‘What the hell happened?’ … if you’re lucky.

My mood fell off a cliff. I had no energy. I could not stay awake. No matter how much sleep I got I never felt rested. I had no idea what anyone was talking about at work. I bluffed and nodded. I took junior staff into meetings to speak for me. I could not articulate even the most basic proposition

Sure enough the day came when I finally looked for ‘the big escape hatch’. I had an unscheduled meeting with my manager where I was sandblasted, my mask and protective shell blown away. I felt so raw and vulnerable. My self-esteem imploded. I was of no use to anyone. The world would be better off without me.

So of course the only answer is to jump off London Bridge, right? You might die, but even if you get rescued you won’t have to go to work and you will have blown a great big hole in the never-ending road to more success, more money and more prestige. Freedom!

I didn’t. I caught the thought. I caught the thought of driving off the road into a valley too (that could look like an accident and my family would get the insurance). I had an emergency call with a psychiatrist I had started seeing. He said go to HR. I went to HR. They asked if I was having thoughts of harming myself. I said I was. They sent me home. Then the healing began.

I found out that I have Bipolar II (type two bipolar disorder).

Tip for managing mental health at work: The danger of ‘people pleasing’

This month I fell back into people pleasing mode. Somebody asked for something and I made that the most important thing on my agenda. I wanted them to be pleased with me and I wanted to be seen as in control, reliable and super efficient. It was nothing important and my reaction was completely unnecessary.

What was that about? A vulnerable child reacting to a perceived critical parent (transactional analysis)? Hypervigilance in making sure any potential threat was neutralised asap (even if it is not even remotely a threat)? Just a desperate need to be liked? All of the above?

This is a very personal but by no means isolated story. I very much recognise the blogger’s comments on those with mental health problems in the high pressured environments thinking they are alone. With recognition of poor mental health along with the stigma comes the thought “I can’t let anyone see this. I will never work again.”

The consequence of such thinking is to ratchet up the pressure further but consequently risk further deterioration.

Stress: what are the responses?

Hypomania, while recognised and not uncommon, is one of the more unusual manifestations of stress. More common are panic attacks, when the sufferer has the experience of overwhelming terror and the fear response getting switched on to the max without there being any objective stress.

This is usually interpreted as an impending physical catastrophe such as stroke or heart attack. An ambulance is called and the employee stretchered out of the office with paramedics. Usually by the time they reach A&E the symptoms have faded.

If they are fortunate, the attending doctors will be open with them and explain that they have had a panic attack and that they need help for that.  Being told that there is “nothing wrong” is both unhelpful and fundamentally untrue.

The other common manifestation is depression, when the individuals mental functions slows down, gets dominated by negative thoughts and eventually leads to a paralysis of functioning and sometimes breaking down in tears.

Nipping it in the bud

What could the blogger have done to avoid the crisis they experienced?

There are three things which we can do to actively manage our mental health in the workplace which will help to avoid a crisis or an episode of illness:

Take time out to think about, recognise and write down ways in which your mind and body react to stress.

2.   Understand the stresses which make you feel more vulnerable

It all very well understanding the signals that your body and mind will give you when you are stressed and recognising the stressors to which you are vulnerable – but you need to be able to act on them.

Mental health should be managed as actively as physical health. We are all vulnerable. No matter how bright, successful, dynamic. The brain is a fragile organ and if it is pushed too far then the functioning will be impaired.

For more details on the full range of Priory Services, please call 0800 840 3219 or click here to make an enquiry.

Work Stress: Save the lives of your staff and your business!